Years ago, I read a fantastic book named The Hero with a Thousand Faces by Joseph Campbell. In it, the author details the Hero’s Journey. This is a powerful story element that every writer, artist, or screenwriter should understand. It illustrates a protagonist’s adventures, from safe haven to the darkest dungeon—be they literal or figurative.

—What is the Hero Journey?—

The Hero’s Journey is a story mechanic that centers around the protagonist’s progression through the various acts of the story. Typically, there are four acts for each journey, from which the audience witnesses the evolution of the hero.

The first act of the Hero’s Journey introduces the hero, while the second and third act elaborates on their ordeals, and the fourth finishes round circle. You may notice certain tropes or definitions used in each act; these are minor plot elements that form the Hero’s Journey—and some are necessary to flesh out the story. 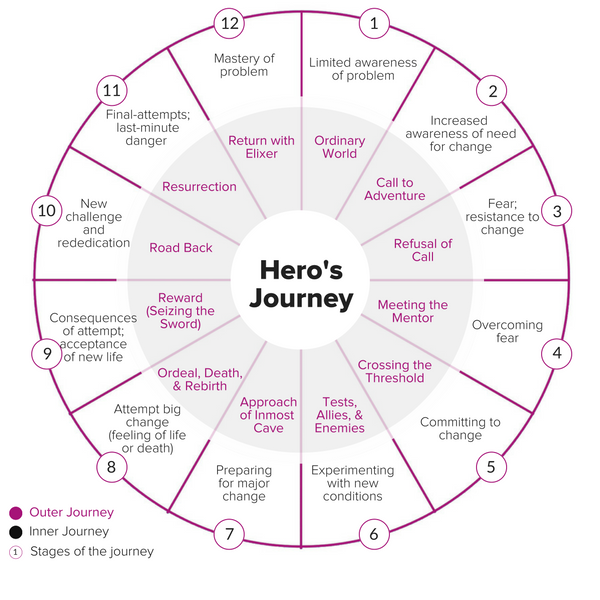 The story begins in the Ordinary World, a mundane realm that may be a safe haven or even a prison for the hero. Here, the audience learns about the hero’s life situation, his/her abilities, fears, and personality.

The Call to Adventure

From the Ordinary World, conflict arises that stirs the hero from complacency. This may be something serious like an assassination or a minor incidence like a strange phone call. The hero now has a choice to pursue the source of the conflict and resolve the issue, or remain in his or her realm.

Initially, the hero may be hesitant to leave the safe boundary of the Ordinary World. The hero sees the risks involved and what’s to gain if s/he succeeds. Some stories skip this step with a willing or reckless hero who jumps onto the quest immediately.

The hero encounters the mentor, a wise or experienced individual. The mentor trains and/or guides the hero, providing new knowledge about the nature of the quest. This character is more often an elderly person but can manifest as a younger individual or inanimate object such as a legendary sword.

Now in a world of mystery and danger, the hero learns more about his/her new adventure. This strange world brings a host of challenges, allies, and enemies. Every obstacle is a stepping stone to unearthing the hero’s personality and capabilities. Abilities are sharpened, and pain is endured. Temptations are met, and the hero struggles with his/her inner shadow self.

Approach to the Dungeon/Inmost Cave

The hero prepares to enter the Inmost Cave. Setbacks occur, but the hero endures, priming for the Supreme Ordeal—an inner crisis that demands change from the protagonist. The hero must analyze personal flaws and push forward to complete the quest. This brief respite offers another connection between the hero and the audience as both understand the danger and gravity of the quest.

The protagonist faces a dangerous challenge, often against the antagonist, risking life and limb to complete the ordeal. The antagonist can also be a dark reflection of a father figure, such as with Luke Skywalker and Darth Vader, with exaggerated flaws of the protagonist. The Supreme Ordeal is a highlight of the hero’s quest, and everything is at stake. S/he must draw upon all the experience from the journey to survive against the antagonist.

Reward, Seizing of the Sword

If the hero succeeds, s/he emerges as a changed person. The hero also receives an award as proof of victory; this might be a mythic sword or artifact, signifying the change in the hero’s life. The hero now prepares for the last part of the quest.

With the quest completed, the hero begins to travel back to the ordinary world, which is the opposite of the call of adventure. Instead of worry or pain, fulfillment and satisfaction arise. The quest is not done, as the last challenge awaits the hero.

The hero faces a test or battle against the antagonist at the final Threshold—likened to the supreme ordeal on steroids. This ultimate tribulation challenges the hero immensely, evoking his/her greatest fears and requiring all the experience they’ve gained from their quest. Failure may result, leading to the hero’s death, a dearth of all hope, or even a severe injury that mars the hero.

The protagonist is reborn from the flames of demise, returning as a new person–transmuted into the true hero, and no longer the false facade from before. Following the brush of death, the adventurer conquers the final ordeal, or the Dragon at the Final Threshold, seizing the Elixir. Reconciliation with the Father is obtained and the hero is purged, fully equipped to end the adventure.

Return with the Elixir

The adventurer returns to the ordinary world as a changed person—physically, mentally, and spiritually. Using the reward from the final ordeal, s/he improves upon the ordinary world and a new era of peace and reflection results. The prize is multifaceted, manifesting either as a damsel in distress, a powerful relic, or a shift in the climate of the realms.  At this point, the hero finishes the journey back to the ordinary world, but things will never be as they were.

Others Variables in the Hero’s Journey

While the hero’s cycle is a general formula for a fictional plot, there is a multitude of additional elements, such as sub-cycles that stretch throughout a trilogy. Sometimes, the hero cannot return to society as they are, instead choosing a form of exile to live a new life more suiting to his or her needs.

How The Hero’s Journey Relates to Readers

The Hero’s Journey repeats in every good fiction; it’s a retelling of human life, the growth of a person into a mature and wise individual. It is a blueprint from which anyone, as a soul, can appreciate the heroic archetypes and make changes for a more prosperous, happier life.

Thank you for reading, and Merry Christmas!

5 thoughts on “The Hero’s Journey in Fiction”

Thanks for the support!

Raimey Gallant
michaelsallacom.wordpress.com/
A Crack in the Pavement

The Art Or Endeavour Of Being Lucid In A World We Live In... Secrets Of The Psychics... Energy, Universe, Futurism, Film, Empowerment...Digital Abstract Art Rendering...

Shining a light on the difficulties of life